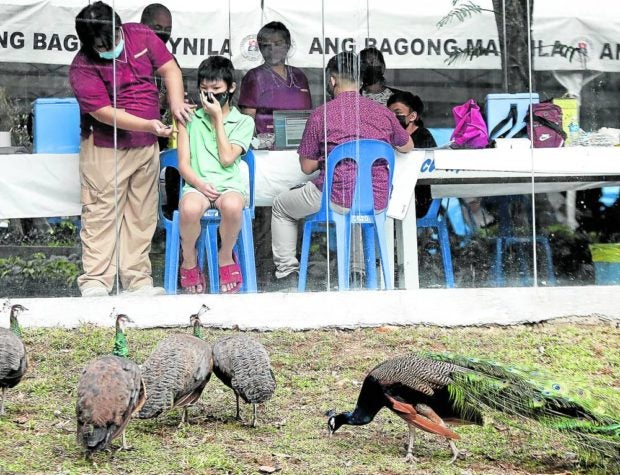 ‘BIRDSHOT’: Separated by glass panels from the peacock enclosure, a boy receives his first COVID-19 shot Wednesday at the newly renovated Manila Zoo, which the city government also uses as a vaccination site for minors and the elderly. (Photo by RICHARD A. REYES/Philippine Daily Inquirer)

MANILA, Philippines – Slow and low vaccination rates compared to its neighbors may be behind the spread of the more contagious Omicron variant of COVID-19 in the Philippines, according to the World Bank.

In a report released Wednesday, the World Bank’s Philippine office said “immunization continues to lag behind regional peers” in the Philippines.

“Slower vaccination and higher mobility during the holiday season are likely causes why the Philippines is one of the first to experience an Omicron variant surge in the region, recording higher cases per capita than other ASEAN countries, as of January 11,” the multilateral lender noted.

Separate data from investment banking giant Goldman Sachs showed the Philippines was among Asia-Pacific’s laggards in mass vaccination, with just 54% of its population fully vaccinated as of January 13.

The World Bank nevertheless said that despite the increase in infections, the severity of new cases appeared to be milder than previous surges, and the national hospital bed occupancy rate remained manageable at 38.1% as of January 10. .

However, he warned that going one notch above the Alert Level 3 imposed throughout January would have economic costs.

For example, the World Bank has identified the emergence of the Omicron variant as a key risk to sustaining months of manufacturing growth.

Estimates by President Duterte’s economic team had shown that Alert Level 3 restrictions in Metro Manila and neighboring provinces representing half of the economy would cost 3 billion pesos in lost output per week.

“Too Slow, Too Late”

Bringing in the private sector in the government’s vaccination campaign could have helped speed up the process, but the chair of the House’s seniors’ panel and seniors’ representative, Rodolfo Ordanes, described the recent decision to bring in large pharmacy chains for the rollout of vaccination as “too slow and too late”. “, although better late than never.

“I suggested the involvement of pharmacies or pharmacy chains in the national immunization program even before. I urged the authorities to do so as early as May 13, 2021, nine months ago,” Ordanes said in a statement on Wednesday.

He added that exploiting pharmacy chains in the rollout of COVID-19 vaccination was seen as “best practice” by other countries and the government was too slow to adopt it.

The United States, for example, has rolled out its COVID-19 vaccine in major pharmacies and supermarkets to make the shots available to its citizens.

“National government policymakers and implementers have been too slow and lack the foresight to engage pharmacies in COVID-19 vaccination, super late. But better late than never,” Ordanes said.

He said the initial participation of seven pharmacies would “accelerate the campaign for primary dosing and recalls” for adults and minors.

Ordanes added that people’s familiarity with well-known drugstore chains such as Mercury Drug and Watsons could “help encourage those who are still hesitant to get vaccinated.”

The lawmaker made the remarks a day before the rollout of COVID-19 vaccines to seven pharmacies in Metro Manila.

Presidential adviser on the response to COVID-19, Vivencio “Vince” Dizon, said on Wednesday that the government was counting on the success of the pilot trial of the plan for several pharmacies and pharmacies to administer booster doses and for certain clinics to administer primary doses.

“The goal is to really make vaccines more accessible to our compatriots so that we can accelerate vaccination and vaccinate more people,” he added.

Dizon said earlier that several government-run vaccination sites had closed or were suffering from attrition after many vaccinators fell ill while other doctors and nurses assigned to them were called back to the wards. COVID-19 from public hospitals during the wave.

He added that the government is resuming its mass vaccination campaign to reach the target of 77 million Filipinos fully immunized by the end of the first quarter once the threat of the Omicron variant subsides.

Dizon, who is also the deputy implementation chief of the National COVID-19 Task Force, reiterated that the government has enough vaccines for everyone, pointing out that the slow inoculation rate in some regions, such as the Bangsamoro Autonomous Region in Muslim Mindanao, was due to geographical constraints.

—WITH A REPORT BY JEROME ANING

Agreement to consider debt consolidation up to 85% LTV