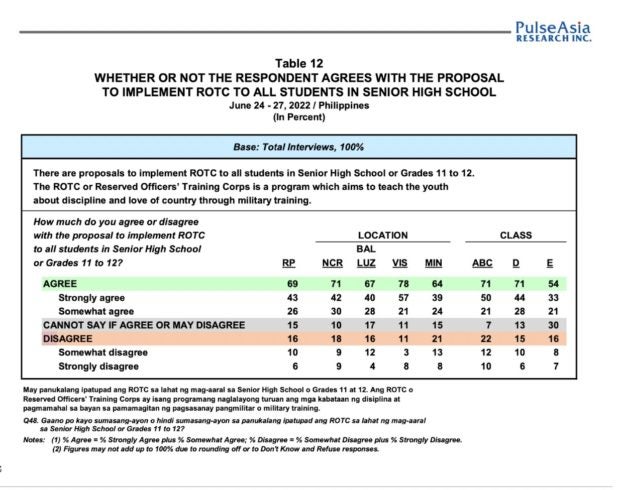 The pollster asked 1,200 respondents whether they agreed or disagreed with the proposed ROTC program for 11th and 12th graders, and 69% of them said they agreed while 16% disagree and 15% say they are undecided on the issue.

The survey was conducted from June 24 to 27.

In Metro Manila, 71% expressed support for the proposal. In Visayas, Libra Luzon and Mindanao, 78%, 60% and 64%, respectively, recorded their approval of the ROTC program for high school students.

The survey also showed that ABCD classes strongly support mandatory ROTC at 71%, while in class E, 54% favor it.

During President Ferdinand Marcos Jr.’s first State of the Nation address on Monday, he urged Congress to make the ROTC program mandatory in high school.

Gatchalian, who chairs the Senate Committee on Basic Education, Arts and Culture, includes institutionalizing and administering the Basic ROTC program for high school students among his priority actions at the 19th Congress.

Under his bill, “basic military training to motivate, train, organize and utilize students for the preparation of national defense or civil-military operations” will be implemented, among other training.

Gatchalian’s proposal also notes that a learner who completes the program will be checked into the Reserve Force at age 18, but it bars students under the age of 18 from participating directly in hostilities.

Meanwhile, students who fail the ROTC program will not be eligible to graduate unless “certified psychologically and physically unfit by the Armed Forces of the Philippines Surgeon General, has completed or is undergoing similar military training, and those who are chosen as college players in athletic competitions.