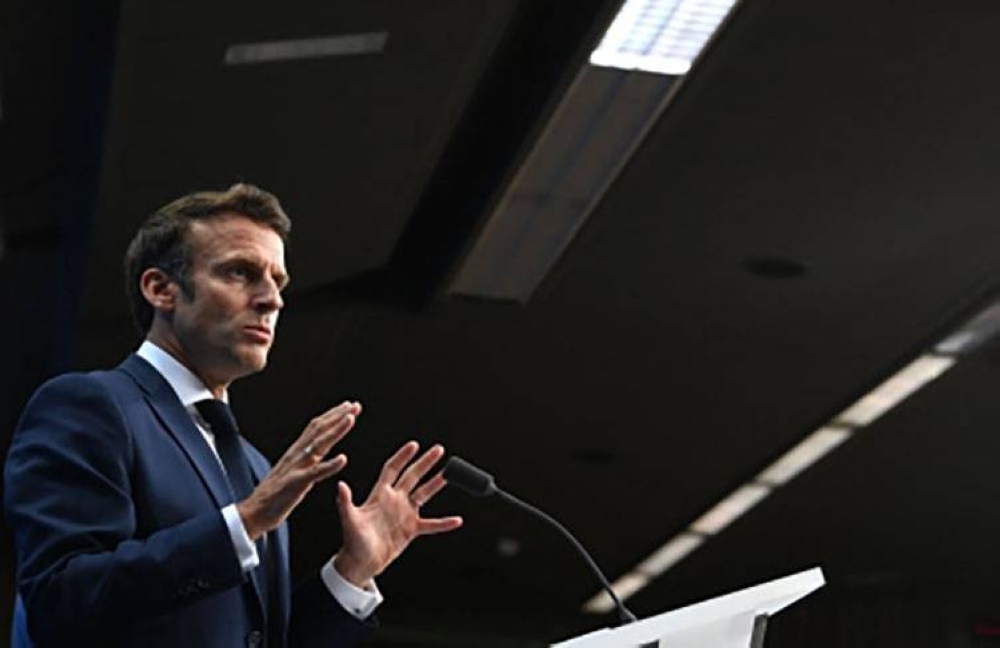 French President Emmanuel Macron gestures during a press conference during a European Council in Brussels on June 23, 2022. PHOTO AFP

Macron made his plea in an address to the nation on Wednesday evening after failing to retain a majority in parliament, a setback that threatens to cripple his ability to carry out his planned reforms.

His centrist alliance finished Sunday’s legislative elections with 44 seats from a majority in the National Assembly, as a new left-wing coalition and the far right made significant gains.

The situation undermines Macron’s reform plans for his second term after his presidential re-election in April – including a key measure to raise the retirement age – and risks damaging his international stature.

Breaking three days of silence the day after the elections, Macron ruled out a national unity government but was optimistic about the chances of progress, even if he offered no concrete solution.

Macron said French political forces must “collectively learn to govern and legislate differently” by building “compromises, additions and amendments but doing so transparently, in the interests of national unity.”

He pointed to two possible paths – either a formal coalition government agreement with another party or by “creating bill-by-bill majorities” in parliament.

Prime Minister Elisabeth Borne, for her part, said she was “very confident that we can find deputies to vote on texts because we have integrated their proposals”.

“No one has a monopoly on good ideas. Dialogue and listening make it possible to improve good projects. This must be a chance for France,” she added.

“Back against the wall”

The main opposition parliamentary groups, triumphant after upsetting the president’s party, seemed in no mood to help Macron, however.

“It’s him with his back to the wall, not us,” said Socialist MP Valérie Rabault, whose party is part of the new left-wing alliance NUPES which saw a surprise increase in votes.

“If he tries to push through his program without an absolute majority, he will be blocked,” she said.

“He will be responsible for the paralysis of France.”

She called for a “correction of course” from the government, in particular in favor of a higher minimum wage and measures to compensate for the rising cost of living.

The conservative Les Républicains (LR) party, seen by many as Macron’s most suitable potential ally, has meanwhile rejected any formal coalition deal, with LR leader in the Senate Bruno Retailleau saying he would examine Macron’s policies. Macron on a “case by case” basis.

“There will be no blank cheque, especially since his projects are so unclear,” added Olivier Marleix, who has just become leader of the party’s parliamentary group.

Acting chairman of Marine Le Pen’s far-right RN party, Jordan Bardella, said it was up to Macron to “take the first step” by telling the opposition what policies he was willing to back down in exchange for their support.

Veteran centrist and Macron ally Francois Bayrou, meanwhile, warned that “the status quo” was not an option without a mandate from voters if Macron was to avoid further “election incidents”.

Despite little obvious progress, Macron said on Wednesday that the opposition was ready “to move forward on major issues” such as the cost of living, employment, energy, climate and health.

Macron, who is attending an EU summit in Brussels on Thursday and Friday, a G7 summit in Germany from Sunday and a NATO summit in Madrid from Tuesday, in his televised address seemed to give the opposition 48 hours to clarify its positions. .

But when asked about the apparent ultimatum on Thursday, government spokeswoman Olivia Gregoire insisted there was no such deadline.

“Allow me to be very clear this morning,” she told FranceInfo radio. “There is no ultimatum, and no question of 48 hours.”

Instead, negotiations could take “several days, maybe even weeks, but certainly not 48 hours,” she said.

“The president is reaching out to anyone who wants the country to move forward,” she said.

Talks would begin as soon as Macron returned from EU headquarters, she said.

“We are opening negotiations, this is the beginning of consensus and compromise,” she said.

“An ultimatum would be the end.”