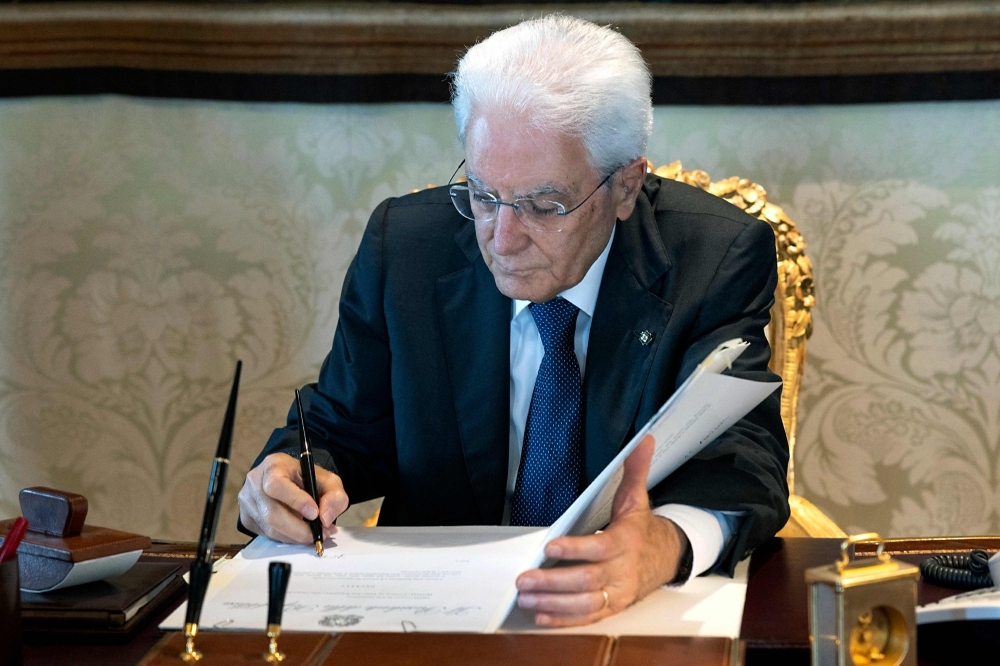 Italy to hold elections in September after Draghi resigns

The elections will take place on September 25, a government source told Agence France-Presse, while the internationally respected Draghi will remain in charge of the government until then.

Dissolving parliament has always been the last resort, Mattarella said, but in this case a lack of consensus among the parties that had formed Draghi’s national unity government made it “inevitable”.

Italy, however, faced major challenges that could not be put on hold while the parties campaigned, he said.

There can be no “stops in the essential interventions to fight against the effects of the economic and social crisis and in particular the rise in inflation”.

According to current polls, a right-wing alliance led by Giorgia Meloni’s post-fascist Brothers of Italy party would comfortably win an instant vote.

“No more excuses,” tweeted Meloni, 45, who has led the opposition vehemently throughout Draghi’s term and has long called for new elections.

Draghi, a former head of the European Central Bank, was parachuted in as prime minister in 2021 as Italy battled a pandemic and a struggling economy.

On Wednesday, he tried to save the government, urging his bickering coalition to put aside their grievances for the good of the country.

But three parties – Silvio Berlusconi’s centre-right Forza Italia, Matteo Salvini’s Anti-Immigrant League and the populist Five Star movement – said it was no longer possible for them to work together.

French President Emmanuel Macron, deprived of a major ally in Europe, hailed Draghi as a great Italian statesman and hailed his “unwavering commitment to reforming his country”.

Ukrainian leader Volodymyr Zelenskyy thanked Draghi, who has taken a hardline stance against Russia and played a key role in the EU supporting Kyiv’s bid to join the bloc, for his “unwavering support”.

The stunned centre-left Democratic Party (PD), which had backed Draghi, said its hopes now rested on Italians being “wiser than their MPs”.

Italy’s latest crisis was sparked when Five Star snubbed a key vote last week, despite Draghi’s warnings that it would fatally undermine the coalition.

Although Five Star sparked the crisis, it was Salvini who pushed Draghi under the metaphorical bus, political commentators have said.

The former interior minister, who is losing voters to Meloni, “saw an opportunity to regain his primacy, in the center-right and within the League”, writes the editorialist Marco Damilano in the daily Domani.

Draghi’s downfall comes despite recent polls suggesting most Italians want him to remain at the helm until a general election due next May.

Anxious investors were watching the implosion of the coalition closely.

The European Central Bank on Thursday unveiled a tool to correct stress in bond markets for indebted members of the euro zone, such as Italy.

The Milan stock market fell 2.0% at the open on Thursday and the spread – the difference between Italian and German 10-year Treasuries – widened to 241 basis points after the resignation of Draghi.

Draghi’s supporters had warned that a government collapse could deepen social ills at a time of runaway inflation, delay the budget, threaten the EU’s post-pandemic recovery funds and send jittery markets tumbling.

The Brothers of Italy party, which has neo-fascist roots, leads the polls, with 23.9% of voting intentions, according to an SWG poll taken three days before Draghi’s resignation.

The PD are just behind the Brothers of Italy, with 22.1%, but could be forced to ally with the troubled five-star (11.2% poll), if they want to have a chance to beat the right .

If a Brotherhood-led coalition in Italy won, it would “offer a much more disruptive scenario for Italy and the EU,” wrote Luigi Scazzieri, senior fellow at the Center for European Reform.

Research consultancy Capital Economics, however, said there were “powerful fiscal and monetary incentives” for the next government to implement the reforms demanded by the European Union, or risk running out of post recovery funds. -pandemic worth billions of euros.

Brothers of Italy has repeatedly blamed the EU for Italy’s problems.

But Meloni’s support for a “strong and joint EU response” to Russian President Vladimir Putin’s war in Ukraine “has already distanced itself from some other right-wingers in Italy and Europe,” Holger said. Schmieding, chief economist at Berenberg Bank.

Debt consolidation does not solve the real problem

SET OF THE ARTS FEAST OF ILOILO | The Manila Times