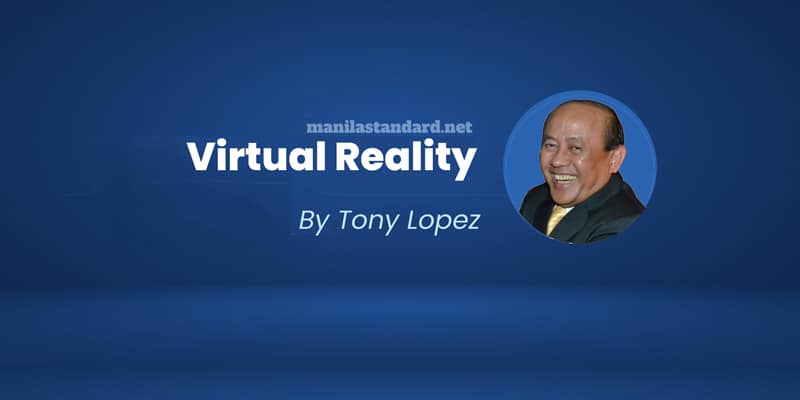 “If inflation is mismanaged or allowed to gallop for long periods, it could lead to unrest and regime change”

At that time, inflation was the number one public enemy of the Filipinos.

Why is inflation a public enemy?

First, inflation, like corruption, steals your money, and you can’t do anything about it. If you could buy 100 pieces of biscuits last year with your P100, you will only be able to buy 94 pieces, six pieces less, with an inflation of 6.1%. Six pieces – these were stolen from you.

Of course, you could say that corruption robs you of much, much, much more.

Many years ago, a study by the University of the Philippines found that up to 40% of the government budget was stolen. This means that if the annual budget was 5.3 trillion pesos, 2.12 trillion pesos are regularly stolen.

With corruption at 40% of the budget and inflation at 6.1% of your budget, you can say that corruption steals a lot more – 6.6 times.

This makes inflation a much easier problem to solve or manage.

So far, at the executive level, President Ferdinand “Bongbong” Marcos is in denial. He finds the “quotation” of 6.1% on inflation quite high.

Bongbong Marcos may be right. The 6.1% inflation cannot be blamed on him or anyone in government.

Medalla, a renowned economist, suggests that without rising prices for imported goods, our inflation might have been as low as 1.22%. Of course, it’s hard to believe.

The Philippines really doesn’t produce anything significant in sufficient quantity. According to President BBM himself, there are shortages of rice, corn, pork, poultry, fish and fertilizers. Shortages could last up to three years, he says.

“There’s not much we can do with rising prices,” Trade and Industry Secretary Fred Pascual told the Management Association of the Philippines. He was asked about rising energy prices, one of the two main reasons behind the four-year record inflation of 6.1%.

The Philippines does not produce oil. And the price of oil has doubled in just one year. And of course, the country does not produce enough food. The shortage of goods accounts for about 25% of demand.

All over the world there are suddenly shortages of food and energy. Almost all major producers of raw materials – rice, wheat, corn, sugar, vegetable oil, pasta – have banned exports of these products.

There are only two things that the Philippines does not lack: humans and the saliva of our politicians and bureaucrats.

We have 111 million Filipinos. Of these, 12 million are deployed abroad. They earn 32 billion dollars a year or 1.79 trillion pula at the current rate of 56 pula to the dollar.

The P1.79 trillion is 33.7 percent of the national budget of P5.3 trillion. Thus, more than 33 pesos out of every 100 pesos spent by the government comes from the sweat, blood and suffering of 12 million Filipino expatriates.

If inflation is mismanaged or left to gallop for long periods, it could lead to unrest and regime change.

Of the 44 rich countries, 37 have seen their inflation rate double in one year. US inflation hit 9%, the highest in 40 years.

Among the countries studied, Turkey had by far the highest inflation rate in the first quarter of 2022: 54.8%. Turkey has had high inflation for years, but it exploded at the end of 2021

In 1933 Hitler took the lead due to hyper inflation in Germany. We all know what Hitler did to the world.

“Financial distress and inflation have the power to change the course of history,” says Palki Sharma on her show Gravitas.

“Inflation is often called the mother of political change,” she said in a recent episode of the inflation show.

Inflation brought down Jimmy Carter. Joseph Biden has become America’s most unpopular sitting president, largely because of inflation. ‘Its odds are that inflation could seal the midterm elections,’ says Palki

Palki says, “Currently global inflation is above 7% and food prices have risen by at least 7%. Around 50 countries are heading to the polls this year and next. These include Brazil, Israel, Pakistan, Bangladesh and Turkey. If prices continue to rise, these leaders could find themselves out of office because rising prices can topple governments.

“They can also change the destiny of a country, look at Venezuela it has the biggest oil reserves in the world but where is it on the world map? It is in the throes of a political crisis and inflation.

“In fact, hyperinflation between 1973 and 2022, prices in Venezuela increased by 3,729%, let that sink in. And now let me also tell you that this is not the worst number, in February 2019 inflation in Venezuela had reached expect il – 344,509% at that time the Venezuelan currency was undesirable.

“They said it was safer to use cash as toilet paper than to buy a roll. What happened next? More than six million Venezuelans have left their homes, nearly 20% of the country’s population. And what was once Latin America’s wealthiest country is now struggling to stay relevant.