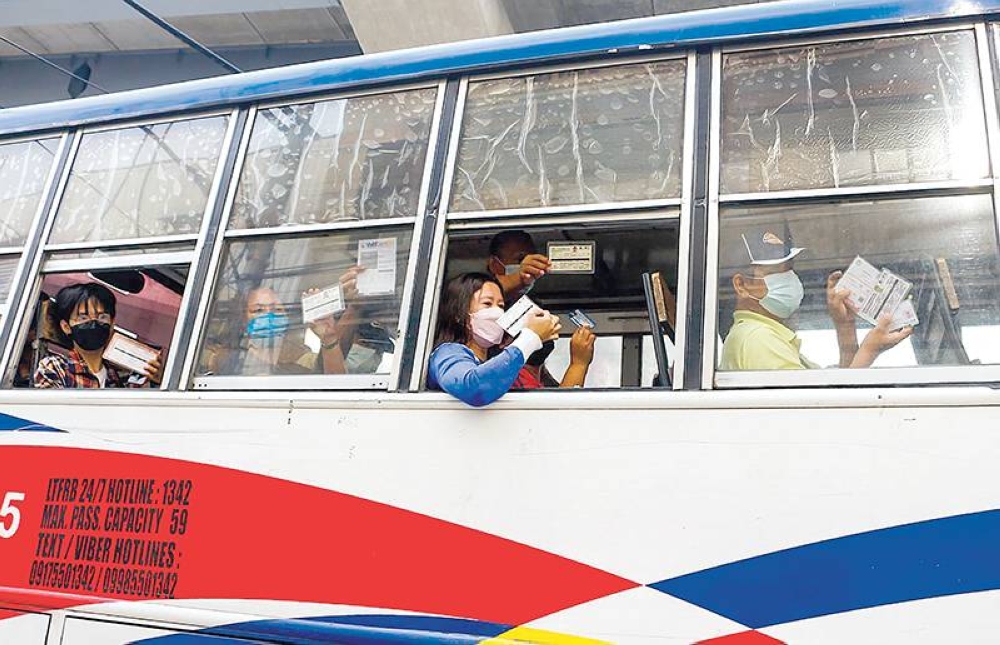 THE government has reformulated its Covid-19 response strategy to make it more effective against the new wave of cases fueled by the Omicron variant.

The Department of Health (DoH) revised its isolation and quarantine protocols which were designed to contain previous surges caused by Delta and earlier variants.

The same procedure applies to asymptomatics, with day one being the date of their RT-PCR (reverse transcription polymerase chain reaction) test.

TICKET TO RIDE Passengers show their vaccination cards from inside a passenger bus on Friday, January 14, 2022, as the government prepares to implement its ‘NO Vaxx, NO Ride’ transport policy public from Monday 17 January. PHOTO BY JOHN ORVEN VERDOTE

Moderate cases will be isolated for 10 days regardless of their vaccination status.

Severe and critical patients should self-isolate for up to 21 days after symptom onset.

Immunocompromised people must self-isolate for 21 days.

The quarantine period for close contacts of asymptomatic cases has been shortened to five days for vaccinated and 14 days for unvaccinated.

Healthcare workers considered close contacts should be quarantined for up to five days if fully vaccinated. Those who have received booster shots can opt out of isolation altogether.

Undersecretary of Health Maria Rosario Vergeire told a press briefing on Friday that adjustments to the Covid response took into account evidence of the effectiveness of vaccines against the virus, the characteristic of Omicron and pressure on the healthcare system from prolonged isolation and quarantine of close contacts.

Vergeire said the new policies are also aligned with revisions to quarantine measures around the world.

Under the new strategy, only health workers, the elderly and people with underlying conditions should be tested as they are the most vulnerable to developing severe Covid.

At the same briefing, Vergeire said Covid-19 cases in the country would not peak until the end of January.

Vergeire said there is no “maturing spurt” and cases will continue to rise not only in the NCR but in other areas under Alert Level 3.

In a separate interview on Friday. Health Secretary Francisco Duque 3rd played down calls to make free testing available in the country.

Duque said it was not financially possible for the government to do massive testing.

The positivity rate was stable at 47.3%.

Citing data from the National Immunization Operations Center, Galvez said 117,383,756 doses had been administered as of January 13.

Despite logistical limitations and the current wave of infections, the average daily bite rate still reached 1.04 million in the past three days, he said.

The government aims to fully vaccinate at least 77 million people in the first quarter of this year and 90 million by the end of the second quarter.

As of January 13, six regions had passed the 70% mark in terms of fully vaccinated individuals.

“This current Omicron push will target the unvaccinated. Salute all LGUs, note all makakaya para mahikayat and mamamayan na magpabakuna na para makaiwas in severe cases, pagkaospital o pagkamatay (To all our LGUs, let’s do our best to encourage our fellow citizens to get vaccinated in order to prevent severe cases, hospitalization or even death),” he said.

The Philippines received 213,655,520 doses of Covid-19 vaccines from various manufacturers.

More than 96 million doses are stored in warehouses, ready to be deployed in LGUs across the country.

Acting palace spokesman Karlo Alexei Nograles said the government had simplified the rules for vaccination against Covid-19 to encourage more Filipinos to get bitten.

In a virtual press briefing, Nograles said that walk-in visits or vaccination without prior appointment are now allowed at vaccination sites.

Nograles said only people with a history of hypertension or showing its signs are required to have their blood pressure taken before vaccination.

He also said that medical certificates are also not necessary unless the person has an autoimmune disease, HIV or cancer, or is a transplant patient, a patient on steroids or bedridden. .

Vargas explains why proposed ‘BBM’ bill is worth supporting – Manila…