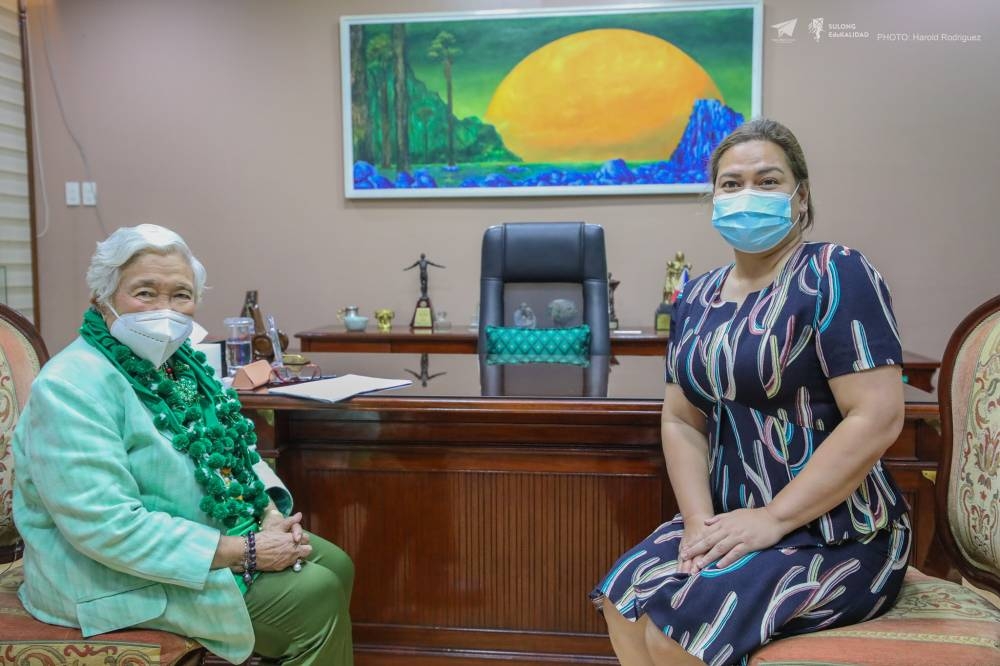 (UPDATED) Vice President-elect Sara Duterte-Carpio met with Education Secretary Leonor Briones on Saturday to discuss the transition to the Department of Education, which she will lead from July.

Duterte-Carpio and Briones held a one-on-one meeting at the DepEd office in Pasig before proceeding with the transition briefing with other DepEd officials.

Briones, in a statement sent by DepEd, provided an overview of the Department’s work under the outgoing administration, including a summary of its scope of responsibility, its contribution to basic education reforms and the identification of issues requiring immediate policy attention, such as back-to-school guidelines.

Duterte-Carpio acknowledged the contribution of the current DepEd team to the programs of her father, President Rodrigo Duterte, while thanking Briones for her statement of support after being identified by President-elect Ferdinand “Bongbong” Marcos, Jr. head the agency.

Among other topics discussed, the orientations for the start of the 2022-2023 school year and the department’s budget for 2023, which will be the subject of consultations between the members of the two teams.

The outgoing DepEd administration will also hand over the work of the National Consultations Convening Committee for the United Nations Education Transformation Summit to be held during the United Nations General Assembly in September.

Briones and Duterte also agreed to hold a joint farewell and welcome ceremony on July 4.

The outgoing leader has also agreed to work with the incoming DepEd administration as a consultant.

Briones had been appointed director of the Regional Center for Educational Innovation and Technology of the Southeast Asian Ministers of Education Organization (Seameo Innotech) effective August 1.

Duterte-Carpio had affirmed his support for the resumption of face-to-face classes in the country.