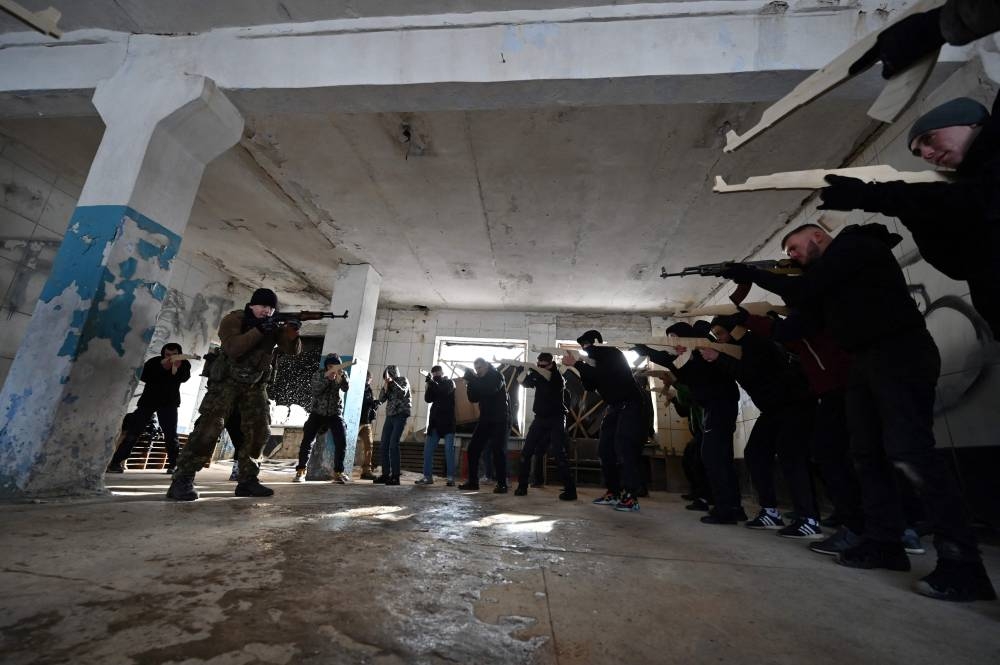 A military instructor teaches civilians to hold wooden replicas of Kalashnikov rifles, as they take part in a training session in an abandoned factory in Kiev, the Ukrainian capital, on February 6, 2022. AFP PHOTO

MOSCOW: As the clouds of war gather over Ukraine, international diplomacy heats up on Monday with the French and Russian presidents meeting in Moscow and the German Chancellor heading to the White House to meet the US leader Joe Biden.

Also on Monday, the German, Czech, Slovak and Austrian foreign ministers were due in Kyiv, downplaying dire US warnings that Moscow had stepped up preparations for a major incursion into Ukraine.

US officials said the Kremlin mustered 110,000 troops along the border with its pro-Western neighbor, but intelligence assessments have not determined whether President Vladimir Putin actually decided to invade.

They said Russia was on track to muster a large enough force – some 150,000 troops – for a full-scale invasion by mid-February.

Such a force would be able to take the capital Kiev within 48 hours in an assault that would kill up to 50,000 civilians, 25,000 Ukrainian soldiers and 10,000 Russian soldiers and trigger an influx of refugees of up to five million people, mainly in Poland. . , the officials added.

In addition to the potential human cost, Ukraine fears further damage to its already struggling economy.

And if Moscow attacks Ukraine, it could face retaliation over the Nord Stream 2 gas pipeline – which is expected to double Russia’s natural gas supply to Germany – with Berlin threatening to block it.

Russia is seeking a NATO guarantee that Ukraine will not join the alliance and wants the bloc to withdraw its forces from Eastern European member states.

A military instructor teaches civilians to hold wooden replicas of Kalashnikov rifles, as they take part in a training session in an abandoned factory in Kiev, the Ukrainian capital, on February 6, 2022. AFP PHOTO

Moscow denies plans to invade Ukraine, and Kyiv’s presidential adviser said the chances of a diplomatic solution to the crisis remained “significantly higher than the threat of further escalation”.

French President Emmanuel Macron, who currently holds the rotating EU presidency, will be in Moscow on Monday and Kyiv on Tuesday to lead efforts to de-escalate the crisis.

He is expected to push forward a stalled peace plan for the escalating conflict with Russian-backed separatists in eastern Ukraine.

The trip will be a political gamble for Macron, who faces a re-election challenge in April.

Biden reacted to the Russian troop buildup by offering 3,000 US troops to bolster NATO’s eastern flank, with a batch of troops promised to arrive in Poland on Sunday.

But US National Security Adviser Jake Sullivan told Fox News on Sunday that Biden “is not sending forces to start a war or fight a war with Russia in Ukraine.”

“We sent forces to Europe to defend NATO territory,” he said.

Scholz said on Sunday that Berlin was ready to send additional troops to the Baltic countries on top of the 500 troops already stationed in Lithuania as part of a NATO operation.

While in Washington, his Foreign Minister, Annalena Baerbock, will be in Kiev with her Czech, Slovak and Austrian counterparts for a two-day visit.

Scholtz will be in Moscow and Kiev next week for talks with Putin and Ukrainian President Volodymyr Zelensky.