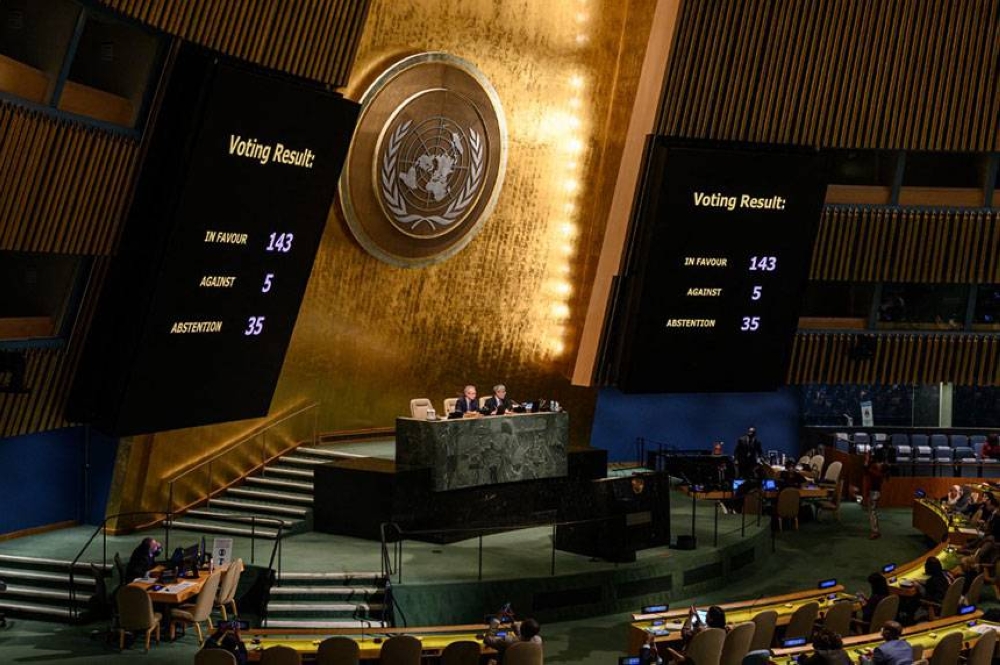 Counting the global cost of the war in Ukraine

Screens display the results of the vote of an emergency meeting of the United Nations General Assembly on Russia’s annexations of four Ukrainian regions at the organization’s headquarters in New York on Wednesday, October 12, 2022. PHOTO AFP

The United Nations General Assembly on Wednesday passed a resolution calling on countries not to recognize parts of Ukraine claimed by Russia and demanding that Moscow end their “illegal annexation attempt”.

A large majority of 143 member states – including the Philippines – voted in favor of the resolution. Five voted against and 35 abstained.

This is an important step, but the General Assembly resolution will not be a game-changer in the search for a peaceful end to the war in Ukraine.

Many were lulled into a false sense of hope after the Russians began to withdraw from Ukrainian territory they had occupied at the start of the invasion, and Ukrainian officials proclaimed that the tide of battle had turned.

But Putin is not a man to be underestimated. When it emerged he was stuck with setbacks in Ukraine and growing dissent in his country sparked by a call for compulsory military service, he announced that Russia had “various weapons of destruction” and that he would use “all the means at our disposal”, to win the war in Ukraine.

Putin’s message was clear: he will not hesitate to use nuclear weapons on the Ukrainian battlefield. “I’m not bluffing,” he stressed.

To emphasize that Russia was not retreating in Ukraine, he ordered missile and drone attacks on key Ukrainian cities. The new offensive was aimed at “liberating” Donetsk, Kherson, Luhansk and Zaporizhzhia, regions that have reportedly held referendums declaring their desire to be part of the Russian “motherland”.

It is the annexation of these regions that the UN General Assembly has ruled illegal.

The conflict in Ukraine could turn into an “eternal war” – an escalating struggle that continues for years with no clear wins for the opposing sides. Vietnam, Afghanistan and Iraq have been caught up in such a protracted war that has left an indelible effect on world politics.

The world, however, cannot afford an eternal war in Ukraine, as the ripple effects worldwide will be catastrophic.

The Organization for Economic Co-operation and Development, a Paris-based group of advanced economies, estimates that Russia’s invasion of Ukraine will cost the global economy $2.8 trillion in lost production by the end next year.

Losses will be greater if a harsh winter forces energy rationing in Europe, he said.

The invasion has already disrupted supply chains, caused shortages of food and other essentials, and rattled markets around the world.

It has triggered an unprecedented cost of living crisis as soaring prices disrupt global food, energy and fertilizer markets.

An estimated 1.6 billion people in 94 countries are at risk of food, fuel or financial crises resulting from the war in Ukraine, according to the UN Secretary-General’s Global Crisis Response Group.

The war, “along with other crises, threatens to unleash an unprecedented wave of hunger and misery, leaving behind social and economic chaos,” said UN Secretary-General António Guterres.

“Vulnerable people and vulnerable countries are already being hit hard, but make no mistake: no country or community will be spared from this cost of living crisis,” Guterres added.

There are more serious consequences. The World Food Program said the number of severely food insecure people had doubled from 135 million in the pre-pandemic period to 276 million in just two years. Fallout from the war in Ukraine is expected to push that number to 323 million this year.

One man holds the magic wand that can make all these problems go away, but Vladimir Putin has instead chosen to put the nuclear card on the table.

The General Assembly called for dialogue, negotiation and mediation to restore peace in Ukraine. To say it will be a difficult task is an understatement.

Winston Churchill once described Russia as “an enigma, shrouded in mystery, inside an enigma”.

The same description fits Putin perfectly. And that makes him a dangerous man to deal with.

BARMM has a new transport chief

The 4Ps are not enough to solve mass poverty—Salceda