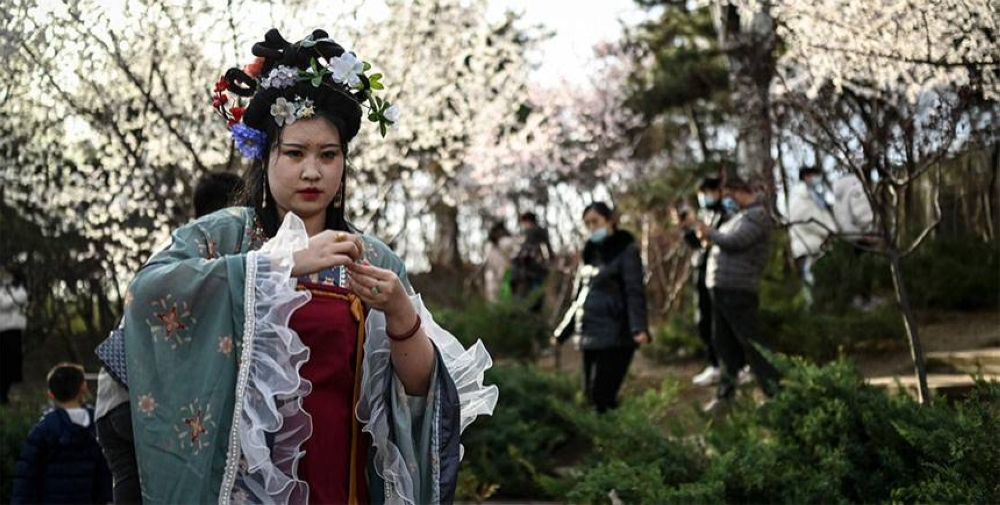 PLEASANT START A woman in traditional costume walks at a sakura garden in Beijing on Saturday, March 19, 2022. AFP PHOTO

The strong start sent an upbeat note for the world’s second-largest economy to expand at above 5 percent in the first quarter, despite downward pressure from bulk commodity price hikes and Covid-19 outbreaks, analysts said.

The better-than-expected start also offered a resounding rebuttal to what appears to be a concerted campaign by Western media outlets and financial institutions to badmouth and destabilize the Chinese economy.

With an ample policy toolkit and sound fundamentals, analysts voiced confidence in the country achieving its around 5.5-percent GDP growth target this year.

From January to February, China’s industrial output grew 7.5 percent year-on-year, compared with 4.3 percent in December, according to data released by the National Bureau of Statistics (NBS) on Tuesday. The growth rate was the fastest since July 2021.

“As China marches into the third year of battling the coronavirus, such economic growth is unprecedented. In the first two months of last year, China recorded meteoric growth mainly due to a low base effect and a ‘repairing growth.’ But this year the fast expansion, which smoothed out the base effect, epitomized the vigor and quality of the Chinese economy,” Tian Yun, vice director of the Beijing Economic Operation Association, told the Global Times on Tuesday.

It’s been rare in recent years for both exports and fixed-asset investment to post double-digit growth, further channeling optimism on the economy, Tian said.

Analysts noted that the uptick in fixed-asset investment was a result of policy moves to front load planned infrastructure investment and issue special-purpose bonds. Also, the impact of the “stay-in-place” policy for the seven-day Spring Festival Holidays “moderated” compared with the last two years, though it still weighed on sectors such as culture and tourism, transportation, catering and retail.

Fu Linghui, spokesperson for the NBS, said at a press briefing on Tuesday that the momentum of the January-February recovery remained relatively good, while acknowledging that the external environment is still complicated and severe, and the Chinese economy still faces many risks and challenges .

“The coronavirus outbreaks in some regions will affect the local economic recoveries, but the overall situation of epidemic prevention and control is stable, and the Chinese economy also maintained stable operations,” Fu said, adding that as uncertainties hang over the epidemic, it will take time to observe its impact.

China has accumulated extensive experience in epidemic control, and the measures in place will effectively curb the virus’ spread, so the impact on the economy will also be gradually controlled, according to Fu.

Liu Xuezhi, a senior macroeconomics expert from the Bank of Communications, predicted that GDP will grow above 5 percent in the first quarter, given the strong start.

“The impact of the epidemic on the economy will weaken after the second quarter, and the quarterly GDP growth rate could climb throughout the year,” Liu told the Global Times on Tuesday.

Tian said that 5 percent could be the “floor GDP growth” rate in the first quarter. “If the coronavirus outbreaks do not weigh heavily on consumption and supply chains, GDP growth may even bounce to 6 percent.”

But downward pressure remains, and Fu also warned about “imported” inflation pressure on the economy.

“The direct impact of Russia-Ukraine tensions on the Chinese economy is limited as the two nations account for a relatively small share in China’s trade. But geopolitics pushed up global bulk commodity prices, which will exert pressure on imported inflation,” Fu explained, adding that China has “favorable conditions” for stabilizing domestic energy supply.

On Monday, while presiding over an executive meeting of the State Council, the cabinet, Premier Li Keqiang stressed the importance of efforts to tide over difficulties to ensure steady economic growth.

China has set its GDP growth target of around 5.5 percent in 2022, projecting policymakers’ confidence in the resilience of the world’s second-largest economy even as they warned of “many more risks and challenges” this year.

The case of remote work