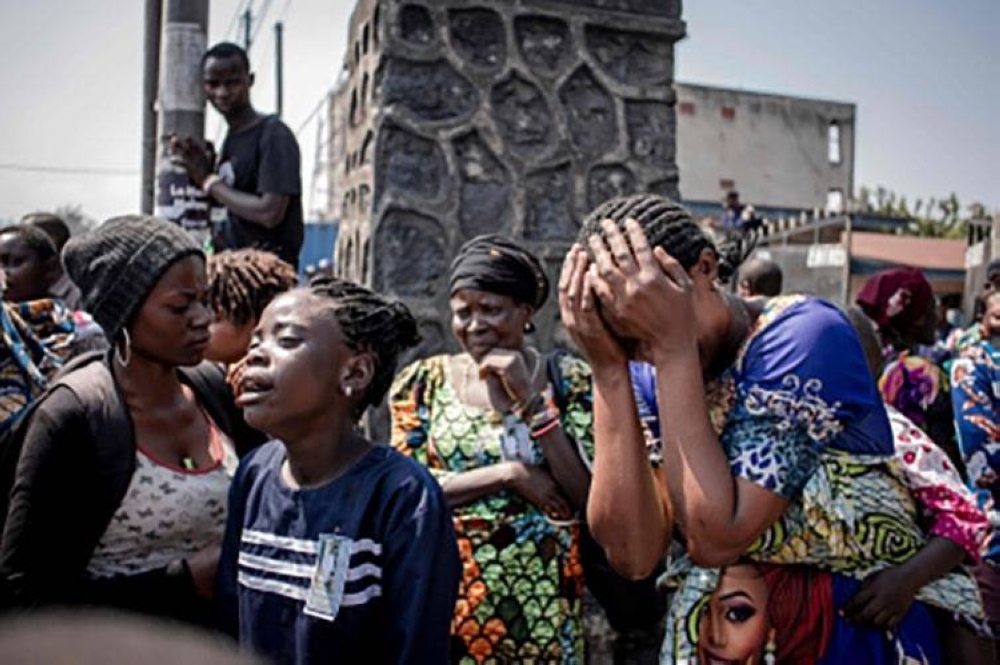 This file photo shows families gathered in front of the coffins of activists who died during protests that took place in Goma from July 25-27 to demand the departure of the United Nations Organization Stabilization Mission in the Democratic Republic of Congo, in Goma on August 5, 2022. Fighters from the notorious Zairian militia killed 22 villagers and injured 16 others during a funeral wake in Ituri province in the eastern Democratic Republic of the Congo, officials announced on Saturday August 6, 2022 (August 7 in Manila). AFP PHOTO

Bunia, DR Congo: Fighters from the notorious Zairian militia killed 22 villagers and wounded 16 others during a funeral wake in the eastern Democratic Republic of Congo’s Ituri province, officials said on Saturday (Sunday at Manila).

Militiamen entered the village of Damascus in the Mabendi area of ​​Djugu territory in Ituri around 11 p.m. on Friday evening and killed 22 people, according to Congolese army spokesman Lt. Jules Ngongo.

“We condemn this attack,” he said, adding that soldiers were currently pursuing the militants.

The Zairian militia describes itself as a vigilante group whose mission is to protect members of the Hema community from attacks by the CODECO militia representing the rival Lendu community.

The Lendu and Hema communities have a long-running feud that claimed thousands of lives between 1999 and 2003 before a European peacekeeping force intervened.

Violence resumed in gold-rich Ituri in 2017, which has been blamed on the emergence of CODECO.

Pilo Maka, the leader of a group of local villages, said residents of Damascus were attending a funeral wake when Zairian militia fighters appeared and began firing into the crowd.

He confirmed the death toll at 22 and said 16 others were seriously injured.

CODECO and Zaire militias often fight for control of gold mines in the region, Maka said, “reckless” of civilian casualties.

More than 120 militias roam the troubled eastern DRC, where militia attacks on civilians are commonplace.

For example, suspected rebels from the Allied Democratic Forces militia – which the Islamic State group describes as its Central African affiliate – killed 10 civilians in Ituri on Friday and Saturday.

Last year, the DRC government tasked members of the security forces from Ituri and neighboring North Kivu province in a bid to stem the violence, but attacks have continued.

“Storm clouds” weigh on the economy